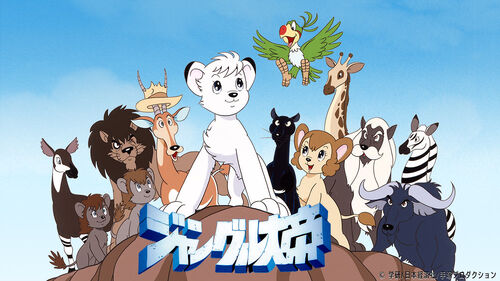 The New Adventures of Kimba the White Lion (Jungle Emperor) is a remake of the original Kimba the White Lion series. The series was produced by Tezuka Productions and first shown on TV in Japan between October 12, 1989 - October 11, 1990 on TV Tokyo. As Osamu Tezuka had passed away after the first six episodes were completed, there is some speculation as to how true this series was to what its creator had in mind. With the exception of those first few episodes, the story line is very different from both the original manga or 1965 series.

Some fans criticized the series for his dark episodes (including drama, death, unnecessary killings etc...) at the point to consider the series unfaithful to the original intents of the director. However even if Tezuka passed away after the production of the first six episodes, darker elements are present from the beginning: even if he did not scripted the following episodes, the general outline for the series was established in the pre-production. Osamu Tezuka was no stranger to the use of serious and drama contents, notably the original manga Jungle Emperor included them (with the subsequent change of the dramatic ending in the anime).

In 1998, Pioneer Family Entertainment (now known as NBCUniversal Entertainment Japan) dubbed 13 episodes of the original series and released it directly to home video. The TV series was given its English title: “The New Adventures of Kimba the White Lion”. Japanese episodes 2 and 4 were recut to skip a story arc where Kimba meets with Kenichi before he goes back to the jungle (Episode 3 was cut completely). Therefore, besides the first episode, the English episodes have a different order than the original Japanese ones. In general, most of the dubbed episodes have cut footage, due to lightening the gore, violence and blood. The score was also entirely redone digitally by synthesizers. Production was canceled after the 13 episodes were dubbed. “The New Adventures of Kimba the White Lion“ (Jungle Emperor) Dub has yet to be released on DVD. The English Dub remains incomplete.

Animals seen in the seriesEdit

1998 English Dub VHS Releases
Add a photo to this gallery

Retrieved from "https://junglemperorleo.fandom.com/wiki/The_New_Adventures_of_Kimba_the_White_Lion_(Jungle_Emperor_1989)?oldid=8777"
Community content is available under CC-BY-SA unless otherwise noted.